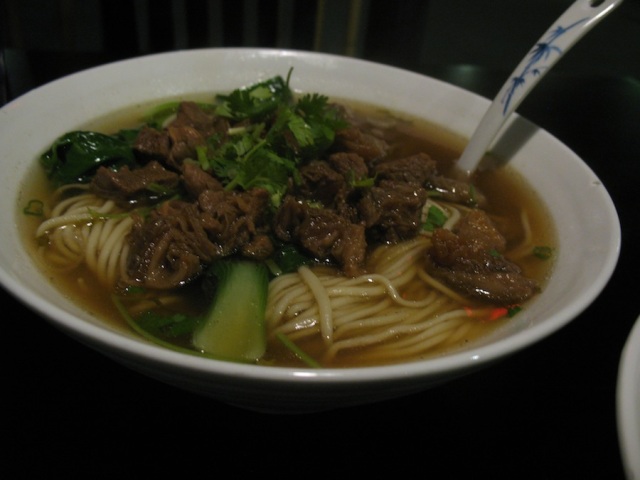 Life is starting to get easy.  A new place opened up next to the Wawa on 36th and Chestnut in University City that does a decent pulled noodle (lamian 拉面–see here for my more detailed entry about this noodle dish).  Lamian isn’t the theme of the restaurant at all–most of the menu is an odd mix of sushi, Japanese noodles, and bubble tea.  You might expect this kind of menu outlier to be made with dried noodles or frozen noodles, but when you order a bowl, a noodle-puller will come out to his station, next to the sushi chef, and pull to order.

The restaurant is called Chattime Hand Drawn Noodle & Japanese Cuisine (a shameless corruption of the Taiwanese brand franchise Chatime—as in “tea” time, down to the same use of fonts).  [UPDATE: Since the end of 2015, this restaurant was renamed Ochatto, perhaps in connection to the Chatime franchise extension to Philadelphia in 2016]  Anyway, the noodles are decent, if not a little pricey, and they also do “shaved noodles”, another Chinese specialty where a chunk of dough is shaved with a razor, directly into boiling water.  I found the consistency of this type of noodle less enjoyable than the bite of their lamian.

Can’t complain too much when lamian is an option, and so close to work.