lon dao jiao หลนเต้าเจี้ยว, a dip for vegetables with coconut, pork and fermented bean base

Lon หลน is a genre of Thai meat dips that accompany raw vegetables and fried or roasted fish. It is different from other Thai dips (like the more discussed nam phrik น้ำพริก varieties) in that it uses coconut cream as one of its key flavors. Ground pork is commonly used as a key meat ingredient, and some chop crayfish, shrimp, or crab meat as part of the meat mix too.

A previous post already discussed a meat dip that is also considered lon in Thailand: prahok katii from our local Cambodian market. Today I’ll introduce another ground pork lon, but this time instead of a fermented fish base (prahok in Khmer, plaraa in Thai) like was used in that dish we will use Thai fermented soy beans, or “white beans”, and tamarind.

The use of these beans is similar to a previously discussed item, “Thai rotten bean sheets”, which are common in northern Thailand, Laos and Burma. The bean flavor is also very similar to the chunky liquid bean paste also cited in that post. 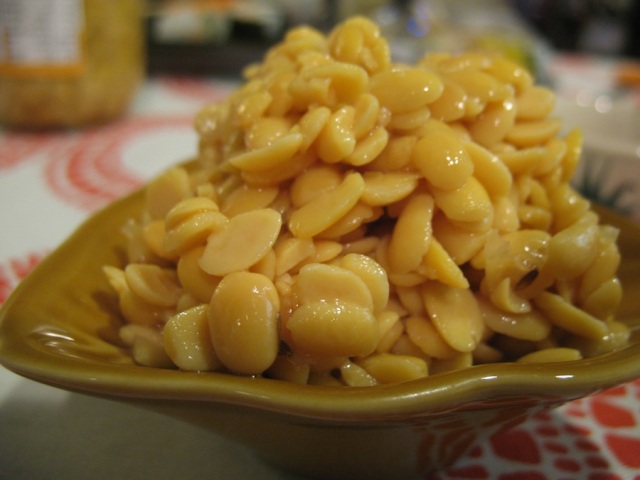 Thai fermented soybeans, getting ready to use in the dip

This week my mother-in-law is visiting us in Philadelphia, all the way from Isaan.  She is showing us how a proper lon is done. The key flavors include today’s showcased bean ingredient, coconut cream (the kind used for cooking curries), palm sugar, and tamarind.

Other research from this came from recipes found in a cookbook from 1966 Everyday Siamese Dishes that I found some months ago at a cookbook store in Manhattan.

1. Prepare beans by rinsing. Ours were pretty salty, so they needed a good rinse. We used about 1/2 the jar of beans. Beans should be then coarsely mashed. Some Thais use a mortar and pestle for this, we used an immersion blender. We blended about 2/3 of the beans and added the rest whole.

Note: some recipes mash the beans together with the meat of choice. We didn’t do that today.

2. Boil about a cup of coconut cream. Add in the soybeans and boil.

3.  After the soy bean paste boils, add meat(s). Add palm sugar and tamarind sauce.  See previous post for how to prepare tamarind.  Add eggs and beat them into the mix. 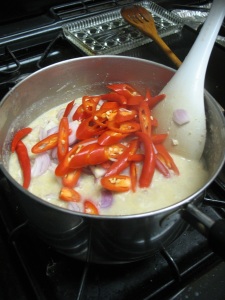 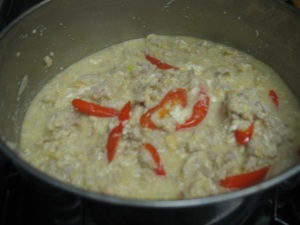 5. After the shallots have been in long enough to take of the rawness, serve with raw veggies.  We had sliced cucumbers and long beans (and pan fried bacon-wrapped enoki mushrooms): 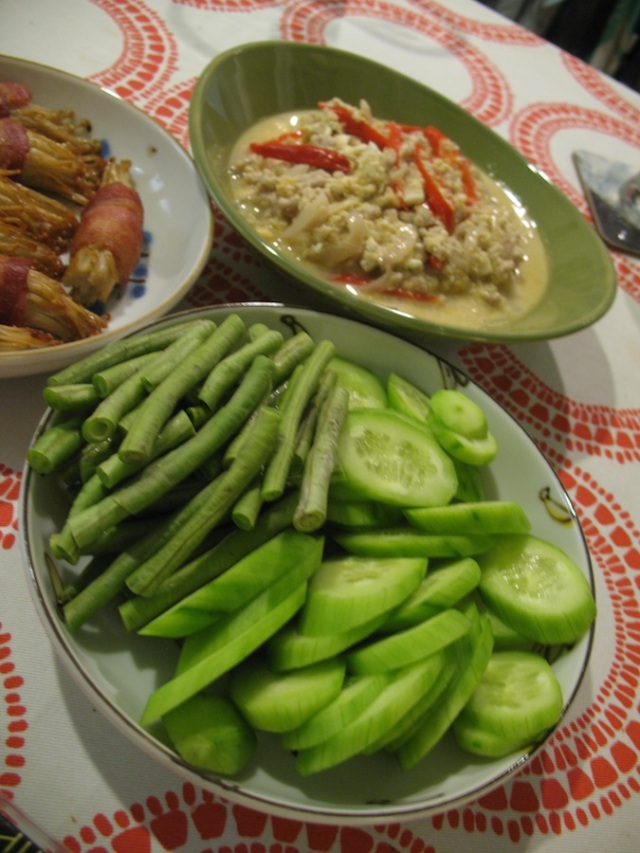