Tagine of lamb and peas

Mmm, tagine.  That slow cooked earthy goodness of clay pot magic that is commonly in the form of savory meat stews.  But what a minute… isn’t this a blog about Asian ingredients?

Yes, I know that this is really kind of outside this blog’s intent–to showcase unique and non-typical Philadelphia food finds of Asian origin.  Let’s set that aside for today.  Moroccan tagines are fun to cook in and are delicious; I am cooking and I want to share.

About the name tagine.  Tagine can refer to the cooking vessel, a clay/terracotta/ceramic plate with a lip, and its conical lid.  This is a traditional cooking vessel in Northwest Africa.  If you visit restaurants in Morocco, you can see tagines of various sizes cooking outside over coal fires.  The word tagine can also be used to describe a stew.  So, if you cook a popular Moroccan tagine in a skillet, it can still be called a tagine.  Restaurants that specialize in fish stews, for example, might cook a delicious giant tray of fish, onions, tomatoes and olives, and that shares the same name.

Some argue that earthenware cooking  imparts a better flavor to the foods.  As far as I’m concerned, the jury is still out on that, but I do love the idea of cooking in clay, and  slowly simmering stews.

I immediately regretted not buying a tagine while in Morocco several years back.  Fortunately for me, you can find (an albeit smaller selection of) tagines online.  The one that I’m using I bought for around $30 on Amazon, made in Morocco.  There are high-end versions out there, but I like basic.  If I ever buy another, I’d try the unglazed one, perhaps the Atlas mountain Berber variety.

Note on using a clay/ceramic tagine: Tagines can break easily with heat shock.  After I broke my first one, I now always use a heat diffuser.  This will make the tagine take longer to heat up, but it will act as a mediator between the flame or electrical element and the tagine. 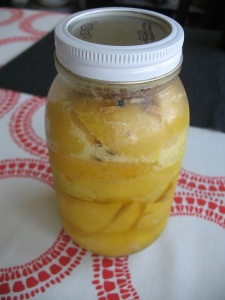 Today’s tagine is Lamb, peas, and preserved lemon.  All of the ingredients will be easy to find in any grocery store, except one: preserved lemon.  I am behind in my explorations of Philly’s several African and Middle Eastern markets, but I haven’t yet found a place that sells them.  I’ll update this when I find it.  That said, it is pretty straightforward to make your own (which is what I do).  Basically you buy a bag of unwaxed (can be hard to find, co-op might be best bet) lemons.  If you can’t get them unwaxed, do your best to scrub the wax off before drying and using. Cut the lemons into fourths, down to the stem end (keeping them together).  Pack the insides of the lemons with sea salt.  Finally, pack the lemons into a jar, tightly.  They will give up a lot of juice.  Ensure there are no air bubbles, top off with some olive oil, and let sit in a cupboard for a month.  Then they are ready to use.

Inspiration for this recipe came from the huge and beautiful The Food of Morocco: A Journey for Food Lovers, with recipes by Tess Mallos.  My recipe is adapted because my tagine is a little smaller.  I cook according to what it can hold.

1. Heat your tagine (takes a while on low to medium heat), with olive oil ready to begin the frying process. In go your finely chopped onion, garlic, and after onions soften add ground spices: cumin, ground (dried) ginger, tumeric. When things start to stick or brown, add a little water. Add equal-part bunches of chopped cilantro and flat-leaf parsley, and oregano or thyme.

2. Nicely brown your chunks of lamb in a separate frying pan in batches.  This is kind of optional, but it will be more delicious with all of that dark fond included.  When nicely browned, add lamb to the mix.  Deglaze your pan with some water, and add that in too.  Salt and pepper the tagine, and give it a stir.  Cover and let simmer for an hour and a half, or until meat is nice and tender.

Prepare your final ingredients.  Chop a small handful of mint, prepare your peas (I used frozen peas), and prepare your preserved lemon.  Rinse the lemon well and scoop out the flesh inside and discard it.  The rind is the part to use.  Cut the rind into thin matchsticks.

4. Finally, add in the chopped mint, peas, and preserved lemon.  Cover and cook for another 10 minutes or so.  In Morocco, this would likely be eaten with flat bread, or couscous.

The preserved lemon gives a very unusual and enjoyable flavor.  It is not sour like a fresh lemon, but is sweet, almost candied.  Nice pair with spiced lamb and mint.

5 Responses to Tagine of lamb and peas