A brief visit to Montreal and Thai green peppercorn

This past week La and I journeyed to Montreal for a long weekend.  It was rainy all weekend, but we thoroughly enjoyed ourselves, eating and drinking our way around the city.  Everyone knows the European influence on Montreal is strong, and we situated ourselves right in the middle of the “French Ghetto” (at least this is how it was explained to us by our host).  We tended to focus on African and Asian foods, however, almost completely circumventing this omnipresent European influence.  We visited the famed Marché Jean-Talon, which was really wonderful–but ended up walking away with several items from nearby groceries that we haven’t seen before in North America: a dried and preserved Algerian beef (thanks for the introduction, pseudoerasmus), fresh Thai green peppercorn (prik thai aun พริกไทยอ่อน), and a flower used in spicy dips and soups in Thailand, dok salid ดอกสลิด or dok kajon ดอกขจร. More on the beef and flowers later.  Today we are back in Philly, cooking with fresh green peppercorn, a first time for us in North America. 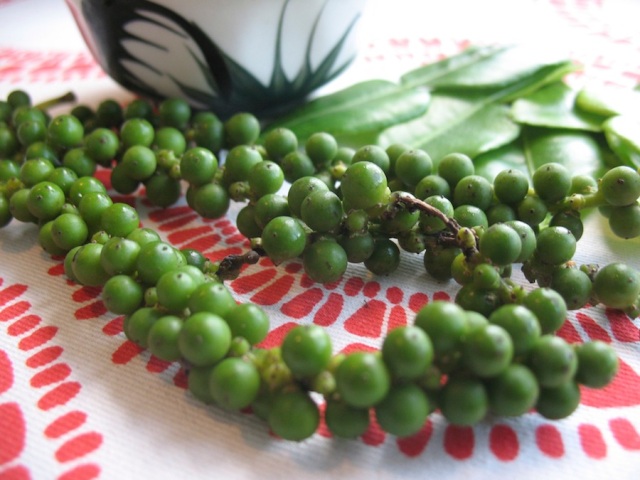 These were labeled as “legume” from the Marché Orientale St-Denis (just around the corner from the St-Denis exit of the Jean-Talon metro stop).

In Thailand, green peppercorn is most commonly used in stir-fries and curries.  When used, it is used in the format above, no chopping or shucking is necessary.  The flavor is like grassy-fresh version of black pepper.  I should mention that most Southeast Asian-focused markets have a canned version of this in brine.  We haven’t had satisfactory results with that in stir-fry cooking.  Consistency is too soft. 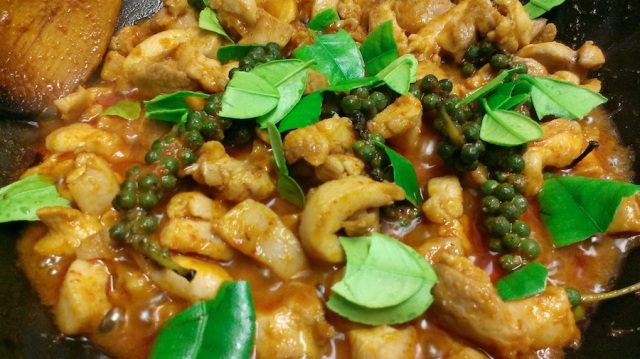 Finally, we used some frozen krachai rhizome, cut into near matchsticks.  This was a key ingredient, worthy of its own post, and detail will come later.  For now, here is the label of the bag we used: