“Sichuan pepper” and some of its relatives

Huajiao and a few of its relatives

Last week I wrote about the growing trend of Northwestern Chinese food in Philadelphia and New York.  Another trend that I’ve noticed over the years, especially clear in places like Madison, Wisconsin, is the continually growing popularity of specialty Sichuan restaurants.  These restaurants started popping up in the mid-2000s, catering largely to newly arrived and independently wealthy students from Mainland China.  They specialized not in American-Chinese standards but in aggressive flavors of Sichuan and Hunan, cooking with loads of chiles, black rice vinegar, and the subject of today’s post, the remarkable “Sichuan pepper(corn)”, or huajiao 花椒 “flowery pepper”.

The trend with the opening of the restaurants seems to have coincided with the lifting of the near 40-year ban on the import of huajiao, or “Sichuan pepper(corn)” in 2005.  Despite its appellation in English, this spice is not a pepper, nor is it a peppercorn.  It is the husk of a seed of the Chinese prickly ash tree.

You really need to try this spice to know what it’s all about.  Huajiao, and its relatives share an unusual trait: the ability to provide a numbing sensation.  If you munch on one of these, there is a strong cool and numbing affect, sometimes described as “tingly”.  In Sichuan cooking, it is often paired with dried chile peppers to provide the mala 麻辣 flavor profile (“spicy and numbing”).

Since I first became acquainted with this spice while living in China, I started to see similar spices used in other countries and regions.  At first I thought it was all the same spice, simply used in different ways.  Now I know that these are all actually different species of the genus Zanthoxylum.  Internationally speaking, the purple-pink Chinese huajiao is by far the best known.  This has lead to the frequent labeling of this and all related spices as “Sichuan pepper(corn)”, whether or not these seeds came from Japan, Thailand, Nepal, etc.  These spices of course have distinct names in their home regions.

I put this post together today to introduce you to huajiao and to some of its relatives.  First, the most commonly available one, and the most widely used in Chinese cooking. 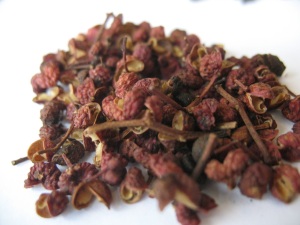 Aside from Sichuan cooking, huajiao is also one of the 5 spices in Chinese 5-spice mixes (with the others being cassia bark, star anise, fennel seed, and clove).  This kind of mix is essential for making stewed meats.  See here for an expanded version of 5-spice for a master stock for Guilin noodles.

Other names: majiao 麻椒, “wild pepper”, xiang jiaozi 香椒子, inu-zansho “dog sansho”.  This one has a slightly more intense cooling and numbing sensation along with it.  Commonly used in cooking, mixed with the purple-pink variety, in spicy hot pot, and other aggressively spiced dishes.  Here is another place where I’ve encountered a mix of both kinds of huajiao: Huang fei hong spiced peanuts from the checkout isle at almost any East Asia focused Asian market in Philly.  If you would like to test out huajiao and/or green huajiao (and if you can tolerate moderately spicy food), I suggest you pick up a bag of these peanuts. 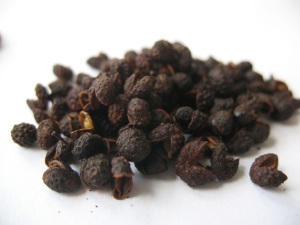 Timur is used in pickles and chutneys in Nepal, and most notably for many, for the tomato and cilantro chutney served with momos.  Its flavor and aroma seems to be a bit more intense than the Chinese varieties, and there is another flavor there that is hard to describe.  I would say immediately it smells like bad BO, but that would be off-putting I am sure.  It’s not unpleasant.  Seems to be a stronger “tingle” than the Chinese varieties (I am tasting these one by one by the way).

I don’t have any of this with me today.  This spice comes from Japan, and is usually sold in a bottle, pre-ground.  I haven’t yet gotten to our [nearly] local Japanese market, Maido, but I would bet they sell it there.  In Japan it is used for the well-known broiled eel, and also in the “7 spices” (七味唐辛子) mixture.

Here you can see an image of sansho, in whole spice form: http://www.thespicehouse.com/spices/japanese-green-sansho-pepper-whole-or-ground 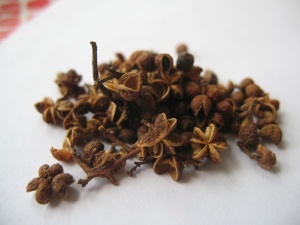 This spice can be hard to find outside Thai and Lao-focused markets.  Like the scientific name implies, it has a slightly more lemony, or fruity flavor.  Fruity and woody, along with that characteristic numbing.  This spice is used in Thai cooking, primarily in “Northern-Style” dishes, often together with long pepper.  For example, for the laab spice mix, and sometimes used to flavor salads and stews.  Notice the characteristic shape, and how it is different from the other species above, with seed pod triads as opposed to individual seed pods.  In Lao the name for this is more like “McKen”, or “bak-ken”. Update 13Dec2014: I finally put out a post for a dish in which this is an important ingredient, Yam jin gai.

9 Responses to “Sichuan pepper” and some of its relatives