Posted on February 1, 2015 by David Dettmann 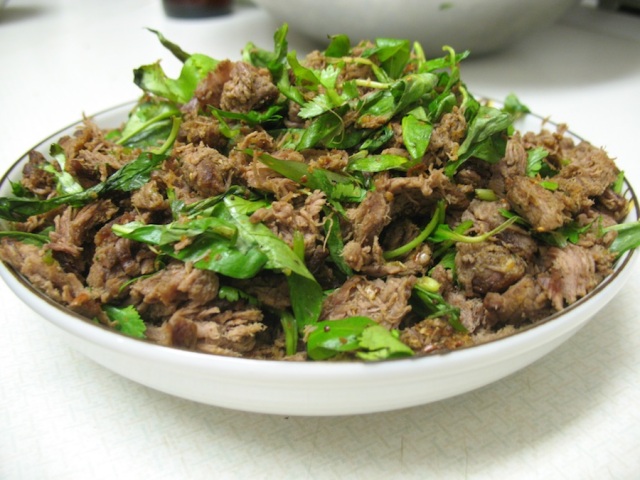 Recently I was inspired with a “Kachin pounded beef with herbs” recipe that I found in Naomi Duguid’s giant 2012 cookbook Burma: Rivers of Flavor. The dish was kind of unusual in that beef was boiled, then fried, and then pounded in a mortar with spices, which were a lot like a Northern Thai combination with “Vietnamese mint”, “Sichuan pepper”, chiles, garlic, and ginger.

Usually when I aspire to learn a dish or a genre of cooking, I have a food memory to build on. This time my target was completely imagined. The next thing I generally do is to find as many variants of a recipe as possible, to learn about what is essential to calling the dish by a certain name. In this case, perhaps due to the complex identities of the Kachin State (which is in Northern Burma, along the border with China), and perhaps due to the relative dearth of resources discussing regional Burmese food, there were few examples that I could find in English, or in Burmese (using Kachin and beef as keywords).

After a bit of research, I was able to find two sites that mentioned Kachin food and beef salad. I was not able to find any mention whatsoever of a pounded beef salad though, aside from references to Duguid’s recipe (here is a link to that recipe at SeriousEats). The difference in the other recipes I found online–here with Kachin Traditional Foods Facebook group and a video on how to make the dish called Shan hkat, and here is a link to the Australian channel SBS with a recipe–was that the meat was already minced or ground, and it was mixed with spices and herbs before cooking.

I am choosing to understand this dish as a cousin of the Northern Thai-style laap. Key flavors in this combination were posted previously in the “Vietnamese mint” post. I decided to adapt this beef recipe to include 3 more ingredients, using makhwaen in place of “Sichuan pepper”, a few dipli long peppers, and a scant tsp of kapi crayfish paste.

I’ve prepared this dish a few times already, and both attempts were delicious though looking quite different from the minced meat dishes in the above linked examples. My first example (see top image) was to simply bruise the twice cooked beef (which can be kind of tough) in a mortar and mix it with fresh spices and herbs (i.e. raw). My second example was to pound the beef with herbs and spices before frying again in some oil and finishing it off with a squeeze of lime. Both results were very pleasant, and are delicious with sticky rice and lettuce. Below is a sequence for my second try:

toast spices, grind to a powder.

Add half of this powder to the beef, that is cooking in a little water

After grinding chile peppers and salt, add the rest of the makhwaen and long pepper, about 2 Tblsp garlic, 1 Tblsp ginger, and 1 tsp kapi (crayfish paste). This will be the spice mix for pounding with the beef. 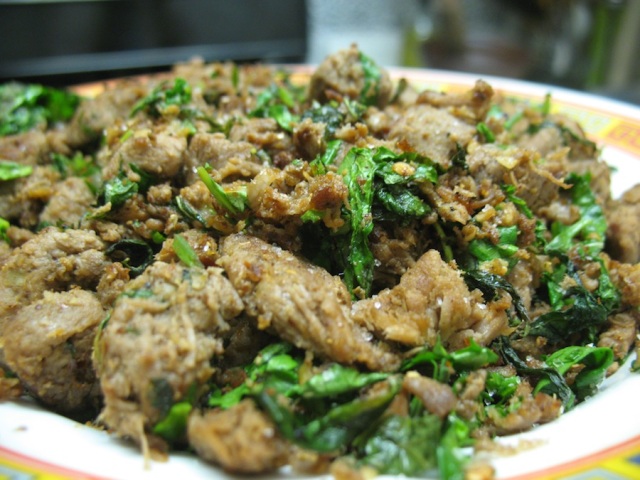 Pound small beef cubes with the paste mixture and with 1/2 cup Vietnamese mint and 1/2 cup cilantro and mint. Heat oil in a non-stick pan on medium-high, and lightly brown the pounded beef.