Have you ever had that unexpected situation when you taste something that transports you back to your childhood–even though you happen to be thousands of miles from where you grew up? The subject of today’s post is exactly that, and improbable as it may seem for me, in the embodiment of a simple homestyle mutton stew with Uyghur flatbread in Kashgar in 1999.

At the time I had been living in Guangzhou for a few years studying Chinese music and Mandarin, and like many other foreign students, teaching English on the side. As I slowly became aware of the fascinating cultures in China’s far west (particularly the Uyghur people of Xinjiang), my summers were used more and more to travel and explore out west. My diet at that point was pretty much converted to a South China “normal”: rice, with stir-fried long leaf vegetables and a preference for Sichuan-influenced spice. Coming from Wisconsin, this was a pretty big shift.

From there, let’s jump to Kashgar in 1999, where my travel companion (who later became my wife) and I explored the city from our base near the famous Id Kah mosque. There was a small restaurant near our hotel where we ate most of our meals at (out of convenience and frugal necessity). Sadly, this restaurant is now long gone as Kashgar has undergone a pretty dramatic facelift and reorganization. Below there is an image of me (white T-shirt) hanging out with the guys who ran the restaurant out front. There is a butcher (center) preparing skewers of kebabs (kawap in Uyghur). The guy seated in front grilled the skewers and the guy in the blue shirt was the waiter. As you can guess from the carcasses hanging, mutton is big in Xinjiang, and is the go-to meat for most meals. This joint’s food was great, as were the welcoming staff. 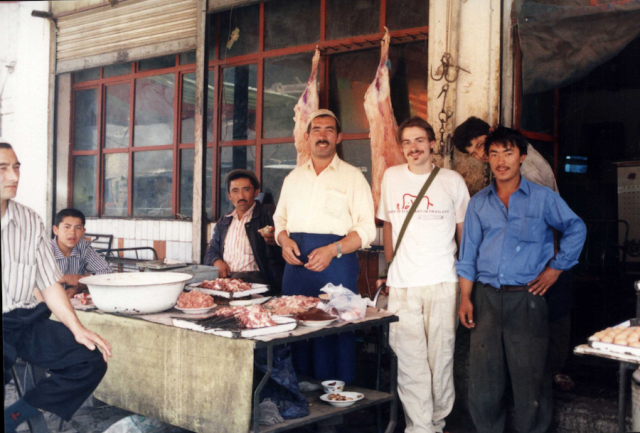 Many American and Western European foreigners based in China’s big cities at that time likely recall the first time they tasted or experienced Uyghur food. For many, this became an outlet where you could find flavors much closer to home: sauces of garlic and tomato, wood-fired breads (at a time when “Western bread” in big Chinese cities was a shitty Wonderbread sponge with sugar glazed onto the crust), and even boiled noodles with a tomato topping similar to spaghetti (a topic of a prior post). All of this served with a laid-back attitude that was quite unlike the cultural zones of East China. 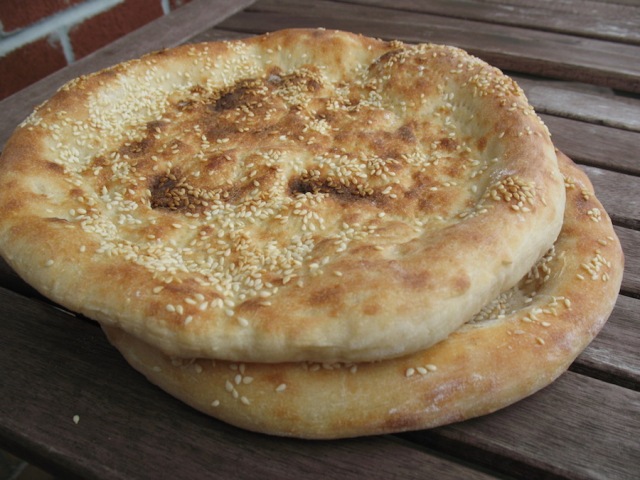 Some home-baked naan with sesame seeds

Uyghur naan bread is kind of unusual in that it is extremely thin in the center, as it is punched and punctured to inhibit rising before baking. This creates a crater in the center that is very compacted and brittle, much like a tough saltine cracker. Ultimately, this is what spawned my food trip today. This qordaq was a savory stewed meat in a tomato and garlic base, together with potatoes and carrots, topped with submerged naan saltine cracker. An unlikely taste of home, in distant Kashgar. 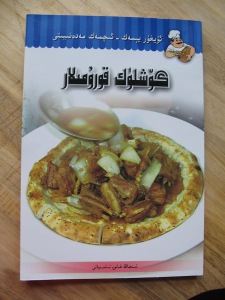 Naan is often used in restaurant settings to act as a kind of plate, in serving kebabs on skewers, and it is sometimes pre-sliced in pizza-like wedges and then topped with a stew. That presentation can be witnessed on the cover of a recent acquisition to my cookbook collection: Goshluk qorumilar (translated as “meat fry dishes”) by Mehmetjan Rosi (2007 Shinjang xalq neshriyati)–pictured to the right.

In order to make that brittle depression in the bread, you need to punch the wide basin of the bread with a device known as a chekkuch. These devices can be purchased in Xinjiang bazaars, and are sometimes patterned in interesting ways. If you don’t have access to a Xinjiang bazaar, you might consider making one of these devices yourself. I had a whole day to figure out how to do this with what I had in the kitchen, and had pretty good results with a pack of bamboo skewers, some masking tape, and some paper towels.

Do as I did if you are artistically curious, or, if you are lazy, use a FORK.

This is a chekkuch from Xinjiang 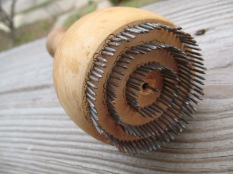 See the nice design? This one is a little rusty…

flatten a bunch of bamboo skewers. Line up their points. Tape them from the top first, then flip over. This can now be used to wrap around a core of a few skewers wrapped with a buffer of paper towels

My finished bundle of skewers, spaced with layers of folded paper towels

Qordaq is a rich stew enjoyed in Xinjiang. One very famous example of qordaq in China is becoming pretty well-known among trendy Chinese restaurants in North America: “Big plate chicken”, or 大盘鸡. I  previously discussed this dish as I was surprised to find it on menus in Philadelphia’s Chinatown back in 2013. In Uyghur that is known as “big chicken qordaq“. Like “big chicken qordaq“, regular (mutton) qordaq is stewed with onions, star anise,  huajiao, chile peppers, carrots, and potatoes. Like many great Xinjiang sauces, there is also a hint of tomato.

My measurements for making 2 Uyghur naan are as follows: 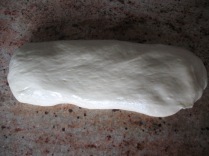 Procedure: Rest bread dough for a few hours. Heat your oven to as high as it will go (I use a baking steel inside my oven–like a baking stone but more sturdy–and get the oven ripping at about 550). Then divide and shape the dough into two balls. After your oven has been appropriately heated, shape the ball into something resembling pizza by pushing on the center and lightly pulling the ring around the outside. Puncture the basin of the bread all over (usually in concentric circles), and add sesame or onion toppings if you like. This is most easily done by dampening the top of the bread and then inverting the bread onto a plate of sesame seeds. Then, invert it back on to the pizza peel.

shape the dough to kind of pizza, about 10-12 inches in diameter

puncture dough in the center depression with your chekkuch device

If you use a stone or baking steel, you’ll need to use a pizza peel to get the bread onto that hot surface. I have found that because the center is so thin, it will burn through very easily from the bottom. Because of that, I change to broil before I throw the bread on, to simulate the Xinjiang wood fire oven, or tonur (described in a prior post). The bread will cook very fast. Keep an eye on it, and rotate or move it toward/away from the broiler as need be. I recognize these are not user-friendly instructions… it is cooking with a kind of unpredictable flame. It is worth it though, if you can get a good browning all around.

first batch: onions on top, which changed to pink for some unknown reason. Otherwise decious bread

Ok, bread is done. Now for the mutton stew. In reality, I did these at the same time. Start the stew after you set aside the bread dough to rise.

My recipe is largely based on one found in the 1993 book Uyghur Tamaqliri, by Mahmut Sabit, and by the VCD video Andre the Giant-style narration by chef Osmanjan Zakir that you can see online at YouTube. Oh, the wonders of the internet! 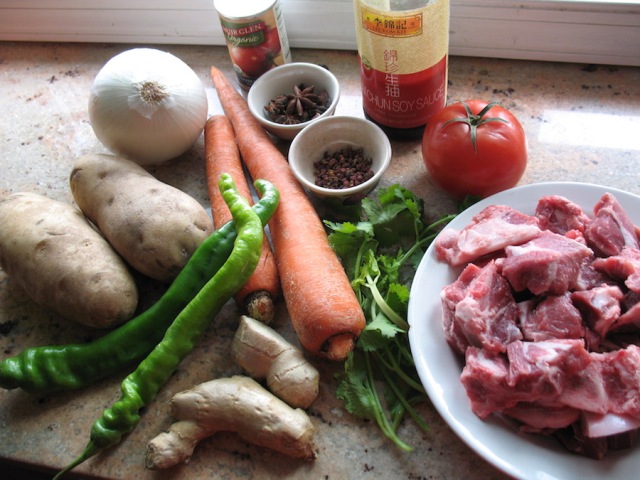 This is a very simple hearty stew: brown chunks of meat in oil or fat, add onions, salt, tomato paste, star anise, huajiao. Top off with water and boil until meat is coming off the bone (around 1.5 hrs): 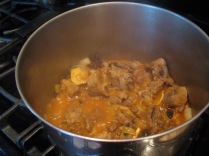 For the last 20 minutes or so, add coarsely chopped chiles, potatoes, carrots, and more stock or water. Bring to boil, taste for seasonings (salt, MSG), and cook until carrots are tender. 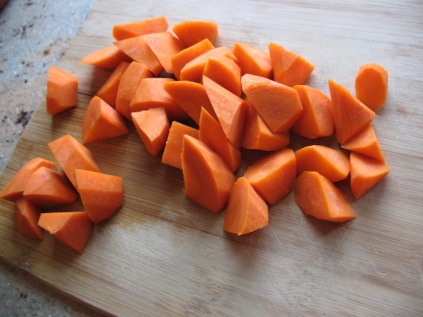 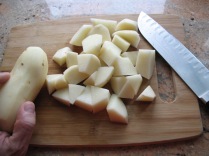 I used quite a bit of mutton fat in the initial frying process. As that hits the tomato paste and MSG, the overall flavor is intensely savory.

No more words. Make this dish and enjoy it.