Some reflections on a recent food trip to Xinjiang, China 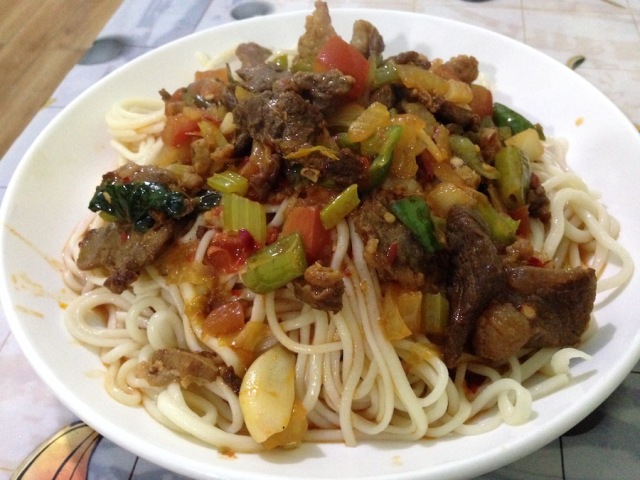 One of my favorite things in the world. Home-style laghman from a small restaurant Teweruk ta’amliri (“Legacy foods”) on Nobishi Road in Kashgar

Great laghman (لەغمەن) is well worth obsessing over. Hand-pulled and perfectly chewy wheat noodles are boiled, drained, and then topped with a hot stir fry of fatty mutton, garlic, tomato, and peppers with any seasonal vegetables. Check out my 2015 post on the topic if you want to learn more, or even make these at home. The noodles pictured above were perfect–it looked like a large plate of noodles, but I devoured them in an instant. They were so good. While laghman is one of the most delicious and ubiquitous foods of Uyghur Xinjiang, I was actually on a self-imposed mission to explore the foods that I knew much less about. Because of that goal, this was one of my only laghman experiences during my whole trip earlier this year in March. That said, my subsequent meals and snacks were no less intriguing.

Regular readers of this blog will be at least somewhat aware that the foods of Xinjiang (and adjacent Muslim regions just to the east) represent a fascinating mix of cultures. Turkic and Persian Central Asia, China, Russia, Tibet, and Mongolia all meet and mingle in this vast region famous for its own legendary agricultural products to forge a delectable culinary landscape.

Much to my dismay, my long-anticipated food trip return to Kashgar’s Old City was met with many closed restaurants, empty food stalls, and boarded-up storefronts. It seemed like half of the bustling businesses in the Old City were now closed or shuttered. The streets were unusually devoid of activity, aside from the parts that were adjacent to the streets with roving police vans with their blaring sirens and soldiers conducting military drills. Ever since the neighborhood’s streets were closed to car traffic a year or so ago as police checkpoints were installed on every block, far fewer people are out selling things and far fewer people are out buying things too. 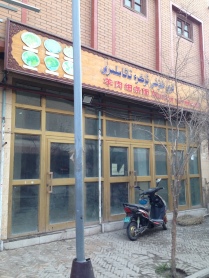 Adilbek’s “western fast food” restaurant. Looks like it might still be operating, but was padlocked while I was there

Among the small handful of open restaurants that I found upon my arrival, one small restaurant seemed to be doing a brisk business. I went up to the locked doors and pressed the doorbell to be let in. Inside customers were quietly eating, keeping largely to themselves with few rare conversations. The waiter directed me to an empty chair at a shared table with an elderly woman and her son and brought me a teapot and bowl. “Nime yeysiz?” he asked. I responded with a dish that I had been dreaming about for a long time, which was also happened to be one of the restaurant’s specialties. “Öy leghmini yeymen–I’ll have the home-style laghman.”

“Teweruk ta’amliri”, a welcome sight and one of a handful of small restaurants operating in March on Nobishi road. Note: this image is from the morning after, the boy is preparing steamed breads outside for morning/lunch service while watering the street (a neighborhood initiative to fight dusty streets)

I was first introduced to the wonders of Uyghur food with travels to Xinjiang in the late 1990s, a time that followed a period of great economic and political opening that nurtured a flourishing intellectual and artistic curiosity throughout the PRC. Printing houses even in rural provinces were publishing new books like crazy, and you could find very interesting scholarly and layman works focused on all sorts of topics, including Uyghur culture and history, both in Chinese and in Uyghur. It was a thrilling time to be there—a time when anything seemed possible. Socially outgoing Uyghurs would often initiate conversation with a cheery “hello!” in English. I found that if I engaged in conversation, that undoubtedly would lead to the famous Uyghur hospitality: invitations to meals, drinks, and even home stay situations. Those extremely positive memories are part of what drove me to do Central Asian Studies in graduate school.

I knew that this trip would be different. The social and political climate in southern Xinjiang has been deeply affected by the “Strike Hard”-related police/military surveillance, as well as by the detainment and forced migrations of a substantial portion of the population. What I didn’t know was how widespread these effects would be, and how much they would influence daily life for Uyghur locals, and even their interactions with tourists like myself. 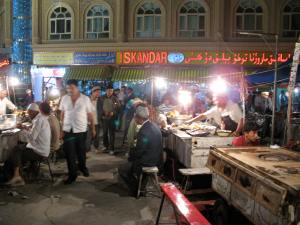 After I finished my plate of noodles, I took a long walk and ended up at Kashgar’s famous night market. The last time I visited in 2010, the market was alongside Liberation Road (Jiefang Lu), and it was thrilling—I was excited to return. Now the market has been relocated to a courtyard further down Orda Ishik Road (欧尔达西克路). It was clearly moved and modified to fit the “tourist village” redesign that the Old City has been undergoing for the past decade or so. The vendor stalls were built with identical styles, and they were placed together in a small labyrinth meant for tourists to explore. There were very few locals eating out at this market (unlike my trip in 2010), but there was a small handful of Chinese tourists as customers.

Sadly, only about half the stalls were occupied with vendors, and some of my favorite night market foods weren’t even there. I enjoyed what was there in any case, the offerings of opke-hesip ئۆپكە – ھېسىپ (boiled and chopped stuffed lungs and sausages) and hoshang خوشاڭ (pan fried meat pies), as well as freshly squeezed pomegranate juice:

I noticed something curious with the opke-hesip vendor. The butcher knife he used to cut up the offal pieces was locked with a chain to the bench. I noticed other vendors had the same setup. This, it turned out, was a new policy for food vendors (as well as butchers) as knives are under strict control throughout the province and are treated as weapons.

I didn’t capture an image of the empty stalls, but someone who came back to Kashgar just after I left, Gene Bunin, commented on that, and the lack of that most famous Uyghur dish polo in a Facebook post (see here for my 2014 post on that dish, with a recipe):

So… why are so many restaurants and shops closed, and where are many of the food vendors? As Uyghurs who were born in Xinjiang have been forcibly recalled back to their hometowns (places where their hukou were registered) over the past few years for several government initiatives meant to control their movements, most were not allowed to return to where they were working–whether to the cities of the Far East or even cities in other parts of Xinjiang. Local business owners in Kashgar were challenged with continuing without staff, and some couldn’t make it and had to close. Other businesses are forcibly shuttered by local authorities (see example below left) because owners are under suspicion of some illegal activity or even “wrong thoughts”. Due to the sorts of people who are put into reeducation, are arrested, and/or disappeared, ranging from Uyghur folklore scholars to Uyghur pop singers, threatening people seem to include political and religious moderates who have a respected and/or influential voice in Uyghur society. 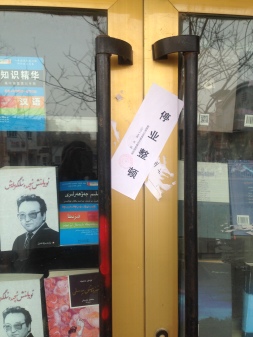 I really enjoy browsing at Uyghur-language bookstores. Sadly, when I got to Hotan, I found them all shuttered by local authorities.

Even the state-run “New China Bookstore” was open odd hours. It seems staff were required to go in for reeducation for part of the days. This sign states, “Currently studying–we are closed”

If my mention of the above forced migrations, arrests, and disappearances in Xinjiang comes as a jarring surprise to you, there have been several news stories and publications in recent months that do a decent job of explaining what has happened. The restrictions are based in the government’s move to clamp down on “illegal activities”, which can include anything from religious gatherings to promoting Uyghur culture (as well as any sort of violence, of course). There has been a pretty steady stream of articles this year highlighting the situation in news outlets like Wall Street Journal, Washington Post, and New York Times (sorry, these are mostly pay-walled). For some free links, here is a recent summary of events from Vox, and here is a very illustrative video report showing what police and military checkpoints look like from Josh Chin for WSJ on surveillance in Xinjiang.

I gleefully sought out every [open] bookstore I could find, to browse for cookbooks or anything new pertaining to Uyghur or Xinjiang culture, language, or food. Not too much has been published in Uyghur in the past two years (outside an enormous display of communist writings), and all of the Uyghur language bookstores I could find in Hotan were sadly shuttered. I visited Chinese language bookstores with the same excited anticipation, but this time I was unable to find ANY Chinese language books on Xinjiang or Uyghur culture, food, or language. Let that sink in for a moment. Isn’t that strange?

I was able to go home with some treasured souvenirs however: reprints of the entire “Uyghur food and drink culture” series, and a 2016 10-disc set of cooking DVDs focused on important and favorite dishes of the Uyghurs (see image on the right).

Despite a narrower range of options in restaurants and market stalls since my last trip and the despite the palpable somber mood of local customers, I was able to find my way to some pleasant and even joyful food experiences in Kashgar and Hotan. Many of these experiences will form the themes of separate posts in the coming fall, but I wanted to share a handful of memorable meals here… 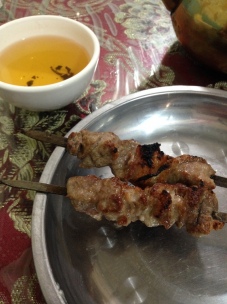 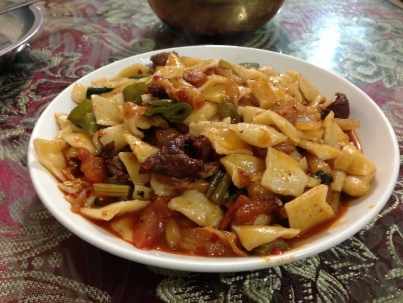 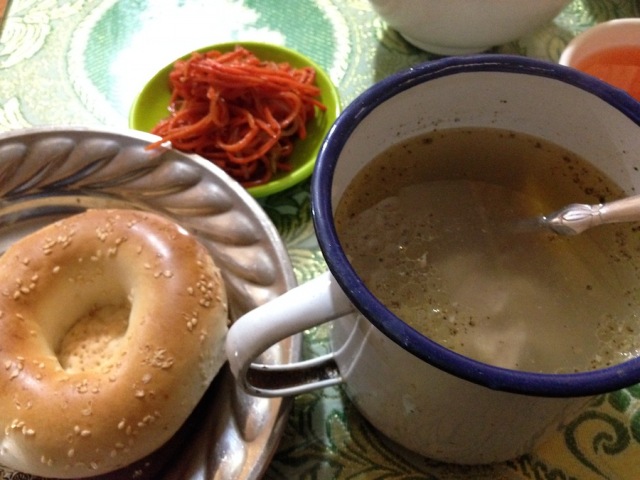 A beautiful selection of dried Xinjiang dried peppers from the Grand Bazaar, including the shriveled kind famous in “big plate chicken” from Shihezi:

A fascinating take on cooking with dry day-old flatbread where meat and root veg is piled on top and it is steamed until cooked into a rich breakfast: qazan kawap قازان كاۋاپ 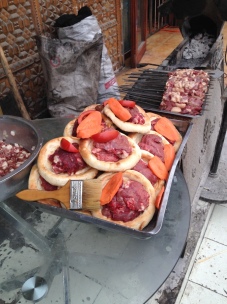 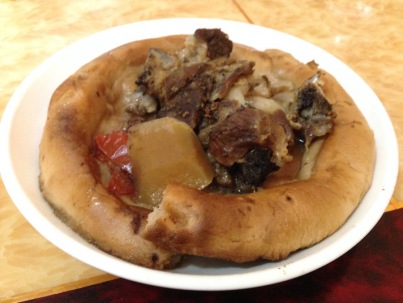 Fancy street food! A spin on the Northwestern Chinese favorite Liangpi 凉皮 (cold skin noodles with gluten and dressing, or as it is known in Uyghur as rangpiza راڭ پىزا —Check out that fancy bowl!:

1 Response to Some reflections on a recent food trip to Xinjiang, China