I have been looking for this spice for quite some time.  Online references imply that it should be easily found at South Asian markets.  I finally ended up finding it at a local North Philly Cambodian market. This spice is of course, the long pepper. 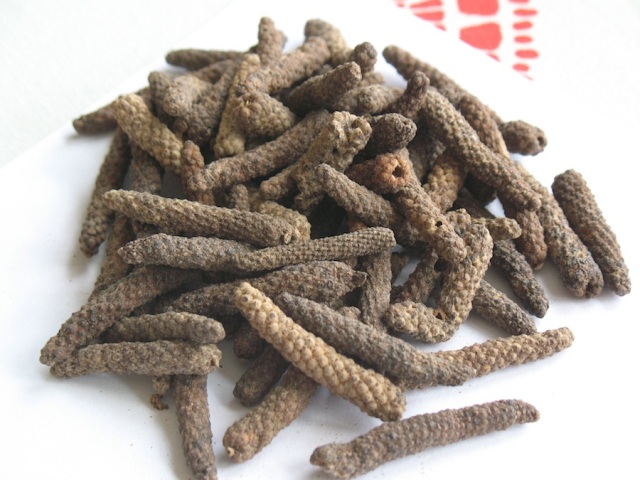 The long pepper is also known as pippali, cabe jawa, dipli, changjiao, pilpilmoya, etc. It is very similar to black pepper, but it is a little spicier.  I first noticed it in markets in Xinjiang and central China, where this is used for medicine more than cooking.

So… why was I looking for it in the first place?  Well, I traveled to Northern Thailand a few years ago, and I was introduced to many new and exciting flavors.  I had previously lived in Thailand, and thought I knew the extent of Thai culinary diversity.  I am wiser now, and I see there is much, much to learn.  Dishes like northern-style laap ลาบ (sour and spicy minced-meat salad) and yamjingai ยำจิ้นไก่ (a spiced shredded chicken salad) really surprised me–there was such a combination of spices…. what were these new flavors?  Some of them are familiar to India, and some are familiar to Southern China.  In particular: makhwaen มะแขว่น, a fruitier cousin to China’s famous “Sichuan pepper” huajiao 花椒 (Update: click here for a later post detailing this family of spices), white cardamom, and the topic of this post, dipli ดีปลี or “long pepper”.

The Cambodian market on Old York Road where I found this item labeled the bag as “dey pley spice”. You can also find this spice online, but it is kind of pricey.

Long pepper is also known as “pipali”.  It is used in medicine and cooking from India to Indonesia, and in lands in between.  It was even known to the ancient greeks for its medicinal properties.

If you are looking for northern Thailand spice ingredients (i.e. you are using Andy Ricker’s delightful Pok Pok cookbook), you should know about this one.  More coming soon, on this and other key northern Thai spices, and what delicious dishes you can make with them. Update 13Dec2014: I finally put out a post for a dish in which this is an important ingredient, yamjingai.