In South Philly there is an area west of Broad St in between Tasker St and Snyder Ave, where you can find many culinary staples and treats that are unique to Indonesia.  Today I took a long overdue trip there to sample a few of the shops, and to bring home an impressive lunch.

I started at Santos Groceries at 1443 Tasker [Update: Santos was sadly closed as of January 2017]. The style and set-up of this market is very similar to the other Indonesian markets in the neighborhood.  Usually a corner store, which fills the role of the local deli or convenience store (perhaps these were old corner deli/hoagie joints previously).  Signage is minimal, and there is little to imply that there are Indonesian specialties inside.  Other shops in the neighborhood have even less signage.  See below.

I came with a shopping list with a few staple items for cooking Indonesian food such as candlenuts (kerimi), salam leaves (aka “Indonesian bay leaves”–though quite unlike bay leaves of Eurasia), and crunchy crackers made of a kind of nut, called emping.  I quickly found all of those items, along with several other things, at this first store.  The store was pretty well stocked for non-perishables, and the shopkeeper Santo was very welcoming.

Afterwards I walked the neighborhood in an “S” shaped pattern, following the one-way streets south.  There are several markets in the neighborhood, and I’ve added the ones I saw today to my map. 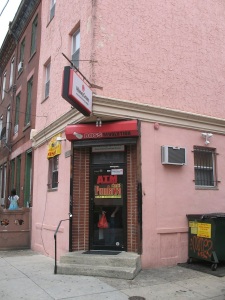 The second place I visited really blew me away.  The place is called Cafe Pendawa Lima, and it is at 1529 Morris Street. Again, a fairly nondescript building, a tiny sign on the door and no other indications that this place is filled with unique, freshly made, delicious meals and snacks.  It is also an Indonesian supermarket to boot, with several non-perishables in the back.  There are so many delicious options here, very reasonably priced (most meals at $4-$7) ready to go, it was is really hard to make a decision.

The meals are actually prepared at Indonesia Restaurant, over on Snyder Avenue. Check out the store’s Yelp images to see how the place looks, with the wire racks running down the center of the place, with all of the prepared food.  Here are some images of what I ended up bringing home: 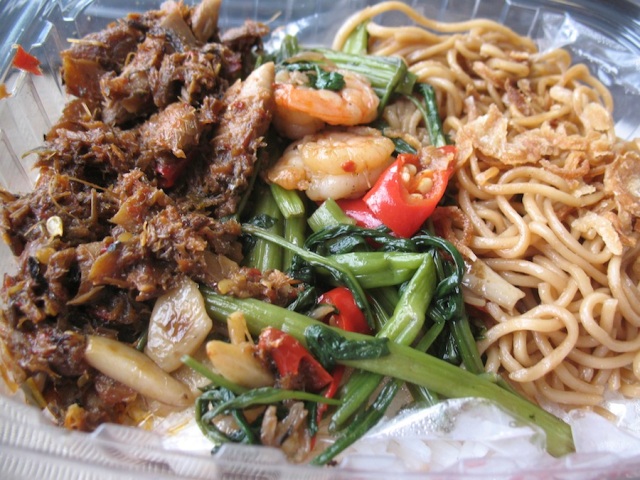 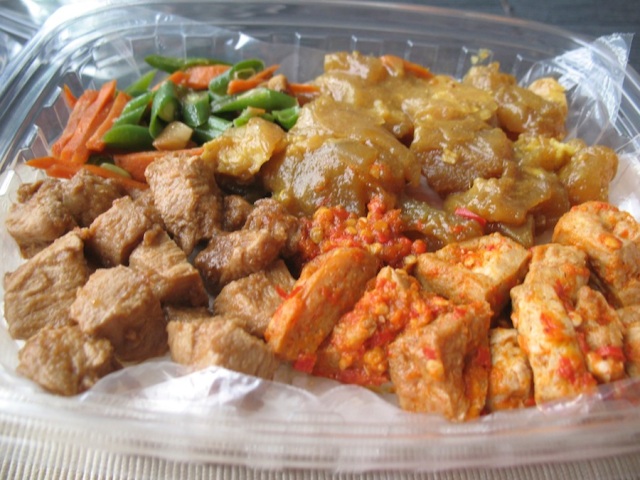 All of the above dishes were as tasty as they looked, I’ll definitely be back there for more when I am in the neighborhood.  I also got these two delicious filled treats: 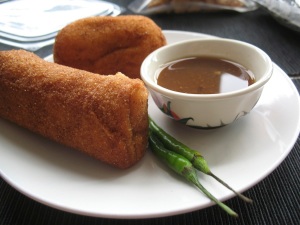 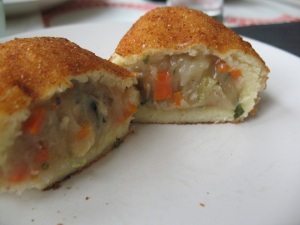 The above were breaded, and presumably deep-fried.  Imagine a cross between a deep-fried apple pie and chicken pot pie.  Sweet and savory.  Still unsure if the balls were made from mashed potatoes, but the consistency was like that.  The dipping sauce had a tamarind base.

I biked down to this area today, and my bags were already full with groceries and all of of this food.  I kept walking, however, just to get a sense for where other notable shops and restaurants were.  I look forward to returning!  Can’t wait to check out these places: