In 2014 I wrote a post on the growing popularity of “Xi’an” and “Northwestern Chinese” foods in Philadelphia and beyond. Since then we’ve seen even more restaurants open as Philly’s Xi’an Sizzling Woks added another location in University City and Chinatown gained yet another “Lanzhou style” pulled noodle restaurant (right under the arch). In New York, Xi’an Famous Foods has more than 10 locations in the city and the boroughs, and had a short-lived spinoff restaurant/bar Biang! Popular northwestern street food items are also slowly creeping onto restaurant menus that cater largely to Chinese eaters: liangpi 凉皮 (cold “skin” noodles), and “Chinese hamburger” 肉夹馍 are a few examples of things you might find–the new Danlu in University City [update: Danlu was short lived and is no longer serving] is featuring the latter as “Xi’an sandwiches”.

These food trends are not happening on the East Coast alone. Our local developments are similar to food trends happening on the mainland, with Shaanxi-style restaurants popping up all over. This can be further evidenced by the increasing number of “northwestern”-themed instant food products at markets catering to Philadelphia’s residents from mainland China. Over the past year and a half, I’ve noticed quite a few new offerings in the instant noodle aisles and in the refrigerated section at Chinatown markets, Spring Garden Supermarket, and at Hung Vuong (which since last year is owned by Heng Fa) on Washington Ave. 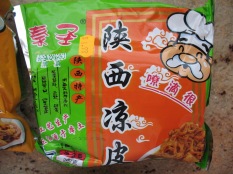 Liangpi 凉皮 is a style of cold noodle and gluten dish popular in Central China. It is dressed with spiced oil and vinegar, and is commonly consumed as a refreshing street food. As simple of a food as it seems to be, the process of making this from scratch actually takes a few days. Last year I found a great 4-part video tutorial on this process from the very talented Xiao Gaojie (小高姐的 Magic Ingredients)–click here to link to that YouTube video series, starting with the spiced chile oil. Steps include mixing a wheat flour and water dough, rinsing the starch away from the gluten and then boiling down that starchy water to make the “skin” noodles and finally recombining the “skin” and sliced gluten into a cold noodle dish with a savory sauce.

When they are freshly made, Liangpi have a crisp and slightly gummy texture. Gluten pieces (I used to think these were pieces of diced white bread!) among the noodles nicely soak up the savory dressing and provide an interesting contrast to the gummy noodle. The instant noodle versions pictured above are not quite as nice; they have a rubberier texture. That said, they are still pleasant enough to enjoy as a side to a meal. If you decide to try these, I’d suggest steaming the noodles as opposed to microwaving them–they’ll be a little softer and less rubbery.

This is how one such example looked out of the packaging–the Qinsheng brand liangpi with the happy chef, image at the top of this post: 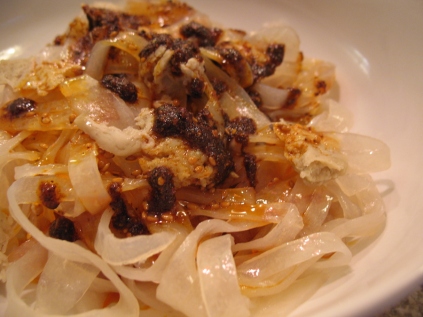 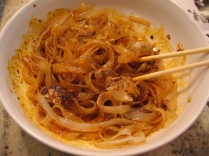 As you may know, Shaanxi, Gansu, and Ningxia Provinces are home to very large indigenous Muslim peoples. Many restaurants throughout China that specialize in these noodle dishes are run by Muslims themselves, and are halal (in Chinese qingzhen 清真). It is rare to see these influences in the US, but the Qinsheng brand advertises this on their products: 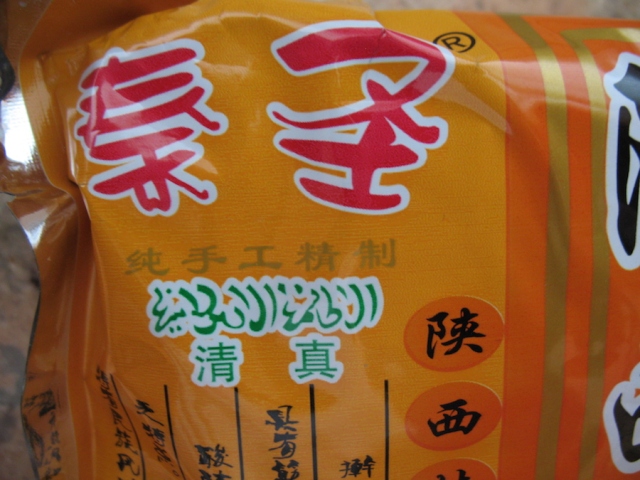 I’ve also been seeing gluten more available in different forms. The brand Havista (I previously posted on their line of tofu skin threads) can be found in the refrigerated section–this gluten can be eaten cold or warmed, perfect for a quick inclusion to a dish:

Liangfen is another item that is now being marketed as a “Shaanxi” notable food. I wrote on this unique cold noodle dish in 2014–be sure to check that out if you are interested in making these from scratch. As I hinted in that post, liangfen have become pretty widely available through the explosion of “authentic” Sichuan restaurants in the US. Liangfen is popular from Sichuan up through the northwest corridor through to Xinjiang, where it is known as langpung. 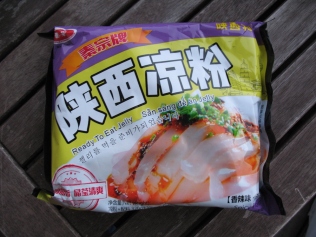 This is another topic that I’ve written about at length in the past, largely focusing on making this noodle at home and enjoying this at Philadelphia restaurants. I’ve noticed a steady shift over recent years seeing both dry and fresh “Lanzhou” pulled noodles at markets. I’m skeptical of what makes these different from other wheat noodles available at the market–the thing that makes Lanzhou noodles special is the way they are pulled by hand. In any case I had to get a pack and see. Nothing to write home about, but okay for a quick preparation. Again, Havista brand:

West of Xi’an in Shaanxi Province is a county famous for noodle dishes–all the way back to ancient times. This is Qishan 岐山—a place already referenced above in the images of liangpi noodles. Saozi mian 臊子面 is a specialty, understood as “minced meat” noodles, and the brand “Dear Xidada” (DEAR XIDADA 旗下实力品牌) is producing this and a few other notable specialty noodles of the NW region. Again, Xiao Gaojie’s Magic Ingredients has a great video tutorial on making these noodles from scratch. 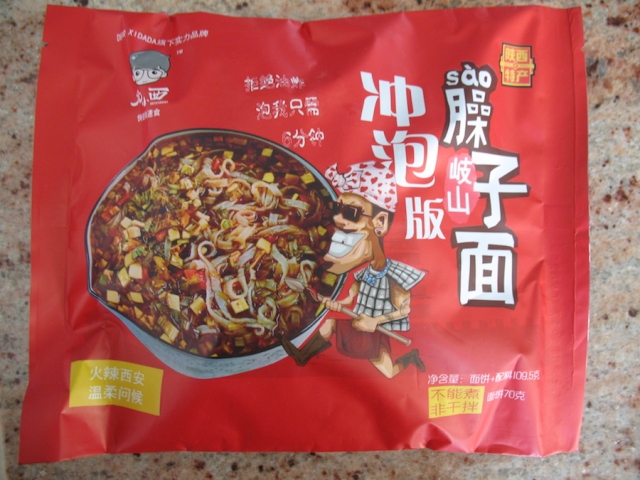 Finally, that brand Dear Xidada is also making a version of instant Biangbiang mian (sometimes called “belt noodles”). This is the same Biang that the NYC short-lived Xi’an Famous Foods spinoff was named after. Tim Chin and Cook’s Science put out a nice video last year and now has a nice recipe behind a paywall for on making these at home–check it out.