As the cuisine of China’s interior becomes popular in US cities (i.e. among the popular Xi’an-themed restaurants in NYC and Philadelphia–see here for my past post on that topic), items like “Chinese hamburger” are slowly becoming commonplace on menus at Chinese restaurants.

A Chinese food cart selling baozi and roujiamo in Madison, Wisconsin in 2013

Roujiamo 肉夹馍 is a popular street food in China’s north and northwest (but it is now pretty much everywhere), consisting of a bland wheat flour flatbread–the “mo” in roujiamo–sliced into a pocket and packed with a coarsely chopped slow-cooked fatty marinated meat. The finished product is a very satisfying greasy snack: a slightly crispy exterior filled with a juicy and savory punch of intensely seasoned fatty meat.

If you want to try a local restaurant version of this Chinese street food, Xi’an Sizzling Woks has a pretty good standard. The new Henan restaurant (that has “Authentic Lanzhou Pulled Noodles” on its sign at the corner of Arch and 10th) also has a delicious version. All the local versions I know in Philadelphia are with pork. In the Muslim Chinese heartland, a fatty mutton version is preferred.

If you want to try to prepare this at home, read on. I’ve been working on my ideal roujiamo and today I had pretty satisfactory results with a slow cooked pork belly.

I think the hardest part to a great roujiamo is getting the bread right. In China this style of bread is called baijimo 白吉馍. In Shaanxi, it is occasionally prepared in an oven, but it is perhaps more often witnessed street-side frying on charcoal-fired griddles. You can see some gorgeous examples in the popular Chinese food tv program A Bite of China (舌尖上的中国), via this link to CCTV’s youtube post. While you are at it, watch this sublime  example of homemade roujiamo session from the beautifully edited Chinese video series “daily food diary” 日食记.

Making baijimo at home can be done by frying breads in a dry heavy-bottomed pan, over low heat and for a prolonged period. Today I had some decent results using a small stainless steel frying pan.

In my research for best practices in making the baijimo flat bread, I came across several Chinese videos, one of the best of which was produced by video food cook “Shaanxi Kitchen Beauty” 陕西美厨娘 (click to see video on YouTube). The video is in Chinese, but you can get a good sense of the kneading technique and the appreciated qualities of a good baijimo. The video’s host outlines the attractive characteristics of a successful baijimo step-by-step: the “tiger’s back” hubei 虎背 is created when the bottom of the concave dough is placed on the hot pan (at approx. 5 minutes into the video). This creates a browned center on the bread. When the bread is flipped, the edge of the bread will crisp first, creating an attractive ring that is often referred to as and “iron circle” 铁圈. The host points out that on the flip side a “silver border” yinbianr 银边 is created, and finally, by pressing the bread flat, a “chrysanthemum flower” juhuaxin 菊花芯 pattern is formed. These terms are often used by other Chinese food bloggers in Shaanxi to describe the qualities of a great baijimo. 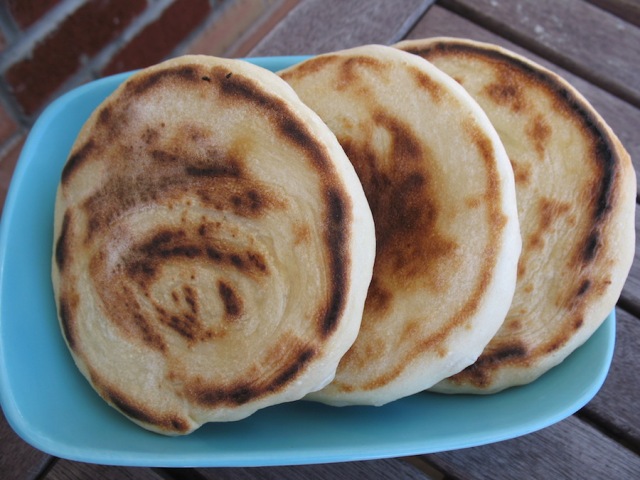 Some of my more attractive examples from today’s experiments

A few points on making baijimo:

1. The bread is a simple dough of all-purpose flour, yeast, water and often a sprinkling of some jianshui 碱水 (potassium carbonate+sodium bicarbonate) or baking soda. Traditional recipes don’t include salt or sugar. I used about 2 cups of flour, 1 tsp of yeast, and 1 tsp of baking soda to approximately 3/4 cups of water. After mixing, let dough rest for an hour or so before sizing and shaping concave discs for frying. 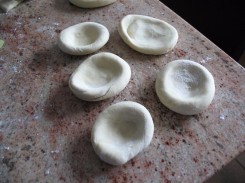 3. When preparing the concave discs for frying, first roll out the pre-sized balls into long flat torpedoes, then roll flat with a rolling pin. Roll this strip into a tight coil. That will help ensure the edges of the dough disc to turn into a concave shape after you press it flat with the round bottom of your palm or your rounded rolling pin. 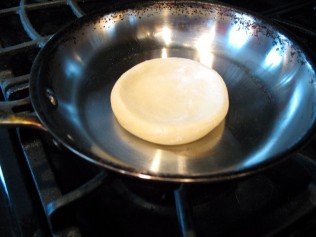 4. No oil is used in the dough or on the pan, and a heavy-bottomed pan is put on low heat. I used a cover to help my breads rise at the beginning of the frying process. The took about 10 minutes to cook (each). If you use a larger pan, you can do several at once.

For roujiamo in Central China, the long-simmered fatty meat is referred to as lazhirou 腊汁肉 (i.e. “stew-preserved meat”). The preparation is similar to other five-spice preparations (i.e. the kinds of slow simmers that help to enhance a meat braising stock of lushui 卤水–discussed in my past posts on Guilin mifen noodle soups). This process requires time, but there is otherwise little fuss. If you are doing this all the same day, start this part before the bread. 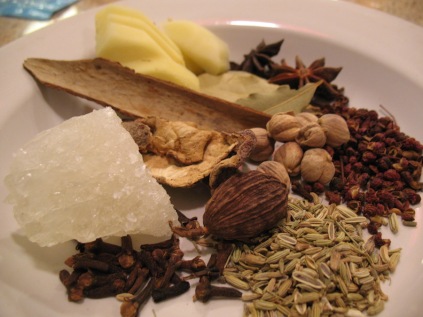 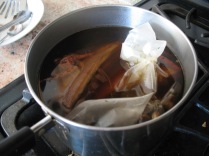 after 2.5 hours, the pork belly is extremely tender 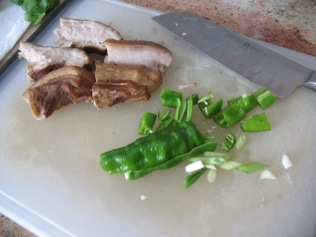 I love this with green pepper, green onion, and cilantro

Before filling the bland bun with the chopped meat mixture, taste for seasonings. Drizzle the chopped mixture with the lushui stock to refresh and intensify the flavors. Add a touch of soy sauce or vinegar if necessary, and pack into an opened baijimo. Enjoy.

2 Responses to A Chinese pan-fried flatbread and “Chinese hamburger”